Go When I was a kid I loved to watch Mutual of Omaha’s Wild Kingdom which ran from 1963 to 1985.  I literally grew up with the show.  It starred St. Louis zoo-keeper Marlin Perkins.  Back then, animal shows were rated PG, not R like they are today and a lot more was left to the imagination.  It always seemed to me the show was disproportionately set in Africa and lions were rock stars.  Wildebeests were kind of like bit actors on the old Star Trek; if they managed to get on the transporter at all, they were unlikely to return to the ship.  Here was the scene that plays in my mind; a pride of near starving lionesses’ approach a massive heard of migrating Wildebeests. (The male lions were normally posing, roaring, preening and resting…mainly resting.)  As the herd becomes collectively aware of the lions, it shifts and packs in tightly.  Then you see it all unfold from the helicopter; one of the young, sick or old gets separated from the herd.  At this point I am screaming at my black and white television set (with tin foil wrapped rabbit ears), “Go back to the herd.  Go back.”  (I always did root for the underdogs or in this case the underbeests). Then you see the pride loop around, offer quick chase, attack the flanks and then one goes for the jugular.  At this point they cut away to commercial and the gory details were left to your imagination while they tried to sell you life insurance.  Getting too far from the herd is a dangerous enterprise for Wildebeests in the Serengeti.  So is getting too far from the church in a fallen world. 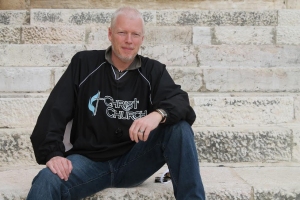 Senior Pastor of Christ Church, Fairview Heights, IL since 1997. I am an orthodox Christian but I am not in a bad mood about it. A Distinguished Evangelist of the United Methodist Church. View more posts